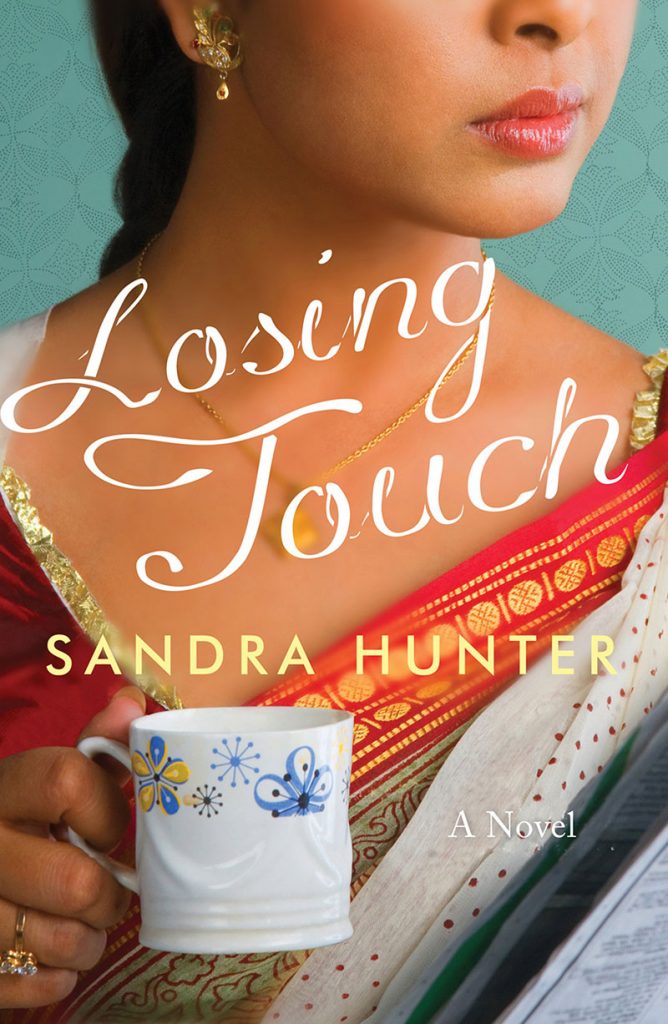 The Elegant Display of Being an Outsider

Losing Touch by Sandra Hunter is a beautiful novel about an Indian family, the Kulkanis, who immigrated to London back in the 1950s. After reading many reviews about this book, the heartfelt reactions to the story impressed me. Personally, I have never experienced a family life like the one depicted in this novel, but the author’s writing let me in to show me what a loving household maintained by two parents looks like. By letting me in to experience this family’s reality, I also saw how wonderful it is to know your family’s health history; the way this knowledge helps prepare you and your family for a hereditary disease that haunts the family tree. I also thought it was amazing to see children who had the blessing of knowing their parents, and how that gave them the privilege of being mean to them while also knowing they weren’t going anywhere because they love them unconditionally.

The novel was written with such elegance and depth, enthralling until the last page. Each chapter made me want to learn more about this close-knit family. Their household wasn’t perfect, but it was a family unit, and I found that fascinatingly heartwarming. The irresistibleness of Ms. Hunter’s story made it a page-turner for me, and it will for you. As I neared the end, I felt sadness for having to move on to read another book, almost as if I will miss the characters the way a child misses their loving kin. Afterward, I was astonished and felt like reading it again to experience this family life indefinitely.

The author shows the outsider feeling perfectly in the scene on page 8 where the father, Arjun, and his brother, Jonti, were deciding whether or not to stay in the department store. Arjun wants his brother to calm down and realize they’re just like everyone else in the store. However, in 1956 and today, Jonti displays the universality of the outsider feeling and how immigrants manifest this feeling internally and externally. Sandra Hunter reveals this when Jonti replies to Arjun’s idea of buying the perfume and then leaving, to which Jonti says, “Security will throw us out on our ear. ‘What are these brown buggers doing in Selfridges?’” Whether security would do that is debatable, but the innate feeling of an outsider assuming security will act violently toward them is universal and never goes away. This is why Arjun eventually complies, sympathizing with Jonti because Arjun knows the feeling, too.

The outsider feeling for an immigrant is one thing, but the first-generation citizen also experiences it. However, the first-generation doesn’t feel it within themselves, instead they feel it from the majority because the majority sees them as outsiders since they do not fit into the majority. Hunter displays this on page 54 to 55 when Arjun is approached by a wealthy British woman who asks him if the place is open, but instead of Arjun answering her, his son snaps back by saying, “The sign says it’ll open at ten.” Then Arjun mutters his son’s name to correct his son’s behavior. The British woman “turns and looks Murad up and down. ‘Don’t you work here?’” To which Murad answers, “Do we look like we work here?” Luckily, the situation does not escalate from there because Arjun apologizes to the British woman, who reacts by staring at him as she gets back inside her luxury car that’s being driven by her chauffer. Afterward, “Murad turns to Arjun. ‘If she was Indian, wearing a sari, dragging her kid along by the arm, you wouldn’t have been so yes-madam-no-madam, would you?’” And the answer is always universally, no, to this rhetorical question posed by Murad. It’s these moments in a first-generation’s experience within their home country that is universal because, although, Murad fits in vocally, he can never fit in visually, and this is something people like the British woman or any person belonging to the majority will continually remind a first-generation citizen in varying ways.

Later in the scene, Arjun reflects on his son’s actions toward the British woman. He ponders how his son, “so inadequately dressed, looks more comfortable here than [himself] in his warm clothes and sensible shoes. Suddenly it comes to him: Murad doesn’t care what these people think of him” (57). Realizing this, Arjun laments that “it would be nice to feel like you could just walk into any place like this one and enjoy the sights… without thinking that others are watching and judging whether you were being too Indian” (58). This part of the scene is also universal because many immigrants have these feelings when they watch their first-generation child living a life without internalizing the outsider feeling.

English Heart Wrapped in a Sari

The author also shows another side of the universal first-generation experience in a scene within the chapter, Inheriting the Gene Flaw; it relates to the first-generation child coming-of-age and how it’s difficult for the immigrant to advise their child because they know nothing about coming-of-age in the unfamiliar country. So, while the Kulkanis are on the bus, the father reflects on his daughter, Tarani, and how “she sometimes reminds him of Mughal paintings… He’d shown her the pictures but she turned away, repelled by anything Indian. She insisted, ‘I’m English.’ And his response, ‘You’re Indian. I’m an Indian father and you are my daughter.’ He wanted to show his love, but she stamped upstairs, face frozen with anger” (72). A teenager reacting this way is definitely universal, but for first-generation nationals coming-of-age with a parent who doesn’t understand coming-of-age in the new country, it stings worse, reminding them how alone they are during this part of their life. It’s also another example of how Tarani, like her brother, feels like an insider within, but everyone else likes to remind her that even though she sounds English and lives English, she will never look English. Every first-generation inhabitant struggles with these universal feelings of wanting to be treated like any other citizen while coming-of-age. And it hurts when you realize, as she did in the scene, that even within the walls of your home, you will constantly be reminded of being an outsider regardless of how you feel about yourself and your home country.

Being an outsider in your homeland universally affects each first-generation citizen differently. Sandra Hunter shows this experience through Tarani and Murad. For example, on page 116, the author has Tarani joking with her mother about being an uptight British person, and this joke opens up the narration, showing the mother’s innermost thoughts about her children’s experience in England; “Tarani doesn’t see herself as British anymore. She’s begun to claim her Indian side with an enthusiasm that is slightly repulsive. But perhaps that’s because Tarani has had an easier time than Murad, who still rejects any suggestion that he’s Indian. Tarani only had a fraction of the name-calling and teasing Murad had to go through at school.” The mother’s thoughts show how many first-generation nationals find their racial or cultural pride later on in their childhood, while others like Murad don’t want to even acknowledge anything that embraces his presence as an outsider. This is a universal experience for the siblings because first-generations experience these scenarios, reacting similarly, vice versa, or in any combination imaginable.

The shadow of being an outsider, whether it’s light or dark outside, constantly follows an immigrant, especially when they have time to realize their children have no clue what it is to pack up and leave your homeland, praying the trek is worth it. This is shown by the author through Sunila, after a conversation between her and her daughter about the daughter’s decision to take a trip to Paris with her friend rather than spending time with her family, which ends with the daughter saying, “Look at you—you came all the way from India to England. That must have been amazing” (121). As a result, Sunila thinks to herself, “How to explain the sheer relief of leaving India for England? But she’d suffered for it. The cramped voyage in third class, how she prayed to stay alive for those three horrible weeks. Back then, travel was a necessary evil. How can Tarani enjoy it? Sunila feels like she nurtured some kind of cuckoo” (122). It’s this quote from Ms. Hunter’s novel that exemplifies the universal reaction of an immigrant realizing their first-generation children cannot grasp the harshness of what they endured to arrive in the unknown country. Leaving the immigrant parent universally wishing their child could somehow understand the magnitude of what it means to be an immigrant.

Lastly, the outsider shadow also casts the feeling of always being on the outside while simultaneously having wonderment for how their first-generation children fit in. The author shows this through Sunila’s point of view after she tells Tarani why her father acts the way he does toward her; “Almost every day, [Sunila] wakes up relieved and grateful to be in England but, even now, after more than nineteen years, she doesn’t have that careless ease of her children’s British mannerisms and ways of talking. They are so at home here” (128). This was a beautiful display of immigrant love for their children, and how that love causes them to realize they wouldn’t have wanted their offspring to grow up anywhere else except in the unfamiliar country, regardless of being an outsider.

Along with the outsider theme regarding the universal immigrant and first-generation experiences, there’s so much more to rave about. The novel Losing Touch by Sandra Hunter is rich with themes anyone would love to read repeatedly. Themes like parents trying to navigate how to raise their children in a foreign country, how the aging process affects everyone, the way children adapt to the new homeland, coming to terms with a hereditary disease you cannot hold back, and how a family unit functions similarly regardless of having immigrant origins or not.

The way I loved the characters in the Kulkani family amazed me. When I read the last page, I felt regret, and wanted to start over; it was my first time seeing the reality of a two-parent family, and I wanted more! Closing the book and moving on was difficult, and I had never experienced that. I’m not a bookworm, so when I reach the end of a book, I usually get a sense of relief, like a non-runner finishing a marathon. It must have been the timeless manner of the author’s writing, because I feel like reading it right now.

So, if you’re looking for an unputdownable page-turner or a book that’ll reveal more depth with each read, Losing Touch by Sandra Hunter is your novel. It’s so good, it should already be on your list of books you’ve read.

Thank you for reading our book review about Losing Touch by Sandra Hunter. We are not affiliated with the publisher, but here’s the link to pick up a copy.

Sign up to receive our monthly book review, and get a free eBook ARC of Petaco Dreams!

E. R. Sanchez is the author of Fried Potato Press’s first young adult thriller, Petaco Dreams, which will be released in 2023. He also has poems and stories published online and in print. If you’d like to read his work that was published online, please click here to go to his Stories and Poetry Section.